BEND, Ore. – December 6th, 2016 – Former champion duathlete (run-bike-run) George Pierce was inspired to make a comeback to racing after a near-death bike-truck accident in 2010. While rehabilitating fractured vertebrae in his back and neck, Pierce developed a new type of footwear that addressed the problem of getting in and out of shoes, both for multi-sport athletes and those with limited mobility. Six years later, Pierce Footwear is helping all types of athletes put their best feet forward.

EDCO: What inspired you to start Pierce Footwear?

GP: Prior to the accident, I’d been retired from the sport for about seven years. Afterward, I realized I was lucky to be alive and decided to make a comeback with the goal of making the U.S. Duathlon Team. I trained every day and made the team in 2011. I went to World’s in Spain and placed 7th that year.

During my training, I knew there had to be a way to improve transition speed when changing shoes (twice in duathlons). I asked a friend to build the first prototype out of an old pair of Sauconys…and they worked! I raced in them two weeks later and immediately cut 5% off my T1 (first transition) and T2 (second transition) times. I filed patents right after that race in 2012. Since then, I’ve gone back and forth to a Korean shoe factory five times in the last three years to refine the product. 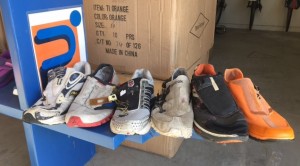 EDCO: Why did you choose to move your business to Central Oregon?

Jay Dicharry PT, SCS, from Rebound Physical Therapy was actually an inspiration for the shoe. He wrote an article on foot dynamics and how footwear should allow the foot to perform. I didn’t realize he was from Bend when I first read the article – it was just a happy coincidence.

EDCO: How did EDCO help with your move?

GP: I first talked to EDCO back in the summer/fall of 2015 during the Outside Games after a local resident suggested I connect with you. Since then, EDCO has provided a lot of friendly help – making introductions (including to the Bend High Cross Country coach), finding housing, storing product, and getting us involved with Oregon Outdoor Alliance (OOA), the Bend Venture Conference and Opportunity Knocks (OK).

EDCO: What’s next for Pierce Footwear?

GP: Well, Pierce Footwear and Special Olympics have a history of empowering athletes through sport, spirit and courage. It all started in 2014 when I met someone from the Special Olympics Committee who thought the shoes could work for their athletes. We’ve sponsored teams in 2014, 2015 and 2016 and have had several athletes on the podium wearing Pierce Footwear. I’m now a global ambassador for Special Olympics triathlons and in March 2017, we’re sponsoring 2,000 athletes as part of the first-ever shoe program for the Special Olympic, followed by pilot projects in Latin America, Europe and China.  We’re currently raising funds to help support our donation of 2,000 pairs of shoes. (EDCO note: To find out more or to donate, click here.) 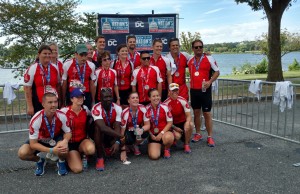 EDCO: Any advice for companies moving to the area?

GP: Call EDCO and work with Tom (Rowley, EDCO’s Bend Manager). Talk to people. Network. It’s easy to get to know the community here. Everyone is so friendly. I would also recommend joining an OK group. I didn’t even know this existed before I moved here and it is fantastic. I’m actually in two groups now (one for the outdoor industry and one for manufacturing) and they offer so much guidance and support.

For outdoor companies, I recommend getting plugged into OOA. I applied to their Venture Out Conference and made it to the semi-finals. I will definitely do that again next year.

For more information on how EDCO can help you move your business to Central Oregon, please call (541) 388-3236.