EDCO is proud to again host the Annual Luncheon at the Riverhouse on the Deschutes. New this year is the opportunity to attend the event virtually. Whether joining in-person or virtually, networking and lunch will be provided. In-person attendees will also receive one of the keynote speaker’s books. In-person tickets and tables are available and on sale here. Virtual tickets and tables can be purchased here.

EDCO’s Annual Luncheon is a tradition providing the Central Oregon business community an opportunity to hear nationally (and now internationally) recognized leaders discussing topics important to the business community. With the challenges and changes surrounding the past twelve months, this year’s keynote will focus on how disorder can transform our lives for the better. 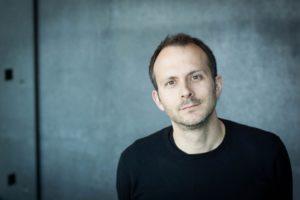 When Things Get Messy:
The Productive Reactions to Destruction

Tim Harford has been described as ‘perhaps the best popular economics writer in the world’. He is a behavioral economist, BBC radio and TV presenter, and award-winning Financial Times columnist. Sometimes called ‘Britain’s Malcolm Gladwell’, Tim offers a distinctive blend of storytelling, humor and intelligence.

He has written nine books, including The Undercover Economist, which has sold nearly 2 million copies in over 30 languages. His BBC Radio 4 series, More or Less, offers a genial smackdown of dubious statistics, while his BBC World Service radio series Fifty Things That Made the Modern Economy was a critical success and iTunes topper. Tim’s most recent book, The Data Detective, was released this past February and his writings have won several prestigious awards, including the Bastiat Prize for economic journalism (2006 and 2016), Science and Data Commentator of the Year (2018) and more.

Tim is the only journalist to be an honorary fellow of the Royal Statistical Society, has given numerous invited lectures (including at Google) and three TED talks, which have alone been viewed nearly 10 million times.

“He’s a genius at telling stories that illuminate our world.” – Malcolm Gladwell

Tickets and tables can be purchased here.
(In-person table sponsors receive six luncheon tickets plus recognition prior to and during the event.)

Tickets and tables can be purchased here.
(Virtual table sponsors receive ten luncheon tickets plus recognition prior to and during the event.)

Now in its 40th year of operations in Central Oregon, Economic Development for Central Oregon (EDCO) is a non-profit corporation supported by private and public members and stakeholders, whose mission is to create middle-class jobs in Central Oregon by: recruiting new employers to move to the region; helping entrepreneurs start new, scalable businesses; and working with businesses that are already here to grow their operations. For more information, visit www.edcoinfo.com.